Difference between revisions of "Toyota Prius Gen3 Board" 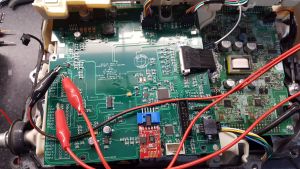 The Toyota Prius Gen3 Board is an open source project to repurpose 2010-2015 Toyota Prius inverters for DIY EV use. It consists of a circuit board and programming that replaces the original logic board in the inverter and allows independent control of it without communicating with a Prius ECU.

The Toyota Prius is a hybrid vehicle. Their inverters are suitable and attractive for DIY EVs because of:

The Gen3 Prius (2010-2015 model years) has a variety of useful components inside the inverter package:

The control board is a physical replacement for the OEM Prius Gen3 inverter logic board inside the inverter. Remove the old one and replace it with the new one.

V1 - This board was sold tested but also as a bare logic board requiring purchase of your own components and SMD placement and soldering skills. https://www.evbmw.com/index.php/evbmw-webshop/toyota-bare-boards/prius-gen-3-inverter-bare-logic-board

V2 - A new board source was found to be both high quality and low cost. The boards were redesigned around the inventory of parts available from this supplier. In particular the high cost of populated and soldered boards (10x the price) from the source used to make the v1 boards is so significantly lower on the v2 that there are likely no savings by building and soldering the board yourself. The circuit now has hardware to support repurposing the MG1 inverter as a battery charger, though as of Jan 20, 2020, software is still in development.

You are not entitled to support, purchase from a vendor who offers support if you want it guaranteed. Treat the community with respect.

The Prius Gen3 Board is suitable to control any (please add: motor types here) motors.

Note: Early versions of the board have a few mistakes.

There are some parts that have to be changed and populated to get the partly build board working.

When using the FOC firmware you have to change the control lines on the board between PWM2 and PWM3 because the current sensors are at L1 and L3 and the software expect the sensors at L1 and L2. You have to cross the resistors R51 and R52 as well as R54 and R55, so that MG2_PWM2 control MG2_C and MG2_PWM3 control MG2_B.

For the sine version I don't know if it is needed.

For mounting in the original case you have to remove some plastic from the carrier of the current sensors below the battery input for the PriusG3_V1b board.

For the Yaris inverter you have to remove additionally some of the mounting points below the board.

Some of the points are as well for the other prius boards noteworthy.

Bill of Materials (from above)

The control board takes advantage of the OpenInverter.org software for control.